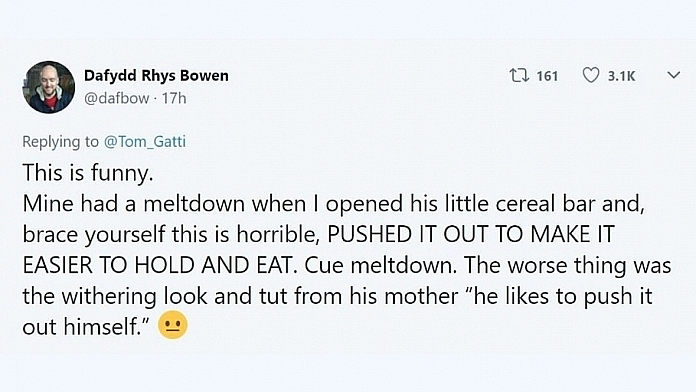 We've all had meltdowns but probably we don't remember them. Best not, to be honest. Imagine how cringe our meltdowns would have been. Perhaps ask your mom or dad, what were your meltdowns, I bet you they gonna rub it in and give you the full lowdown on how pathetic the meltdown was.

So when Twitter user, Tom Gatti, the deputy editor for NewStatemanAmerica, tweeted out to his followers:

Causes of 3-year-old’s meltdowns this morning:
-Banana too small
-Top of banana slightly squashed
-Honey on porridge doesn’t sufficiently resemble “a swimming pool”
-Sister had her 1st wee before his 3rd
-Doesn’t want scooter
-Does want scooter
-Something to do with sleeves

The hilarious meltdowns parents shared were indeed keeping us giggling all day. Here some of the best ones that got retweeted by many.

I once tried to put my toddler daughter in some brown leggings–after that day, I never bought her anything brown, again, til this very day.

She just turned 25. Still no brown.

causes of 12-year-old's meltdowns this morning:
having to get out of bed
having to go to school
having failed to do history homework last night
not able to find pencil case
rain
all of the above being the fault of her mother

My son is 7 now, but his thing when he was 3 was demanding I passed, held, or brought him something without touching it, which was quite a stretch without the power of telekinesis.

This is funny.
Mine had a meltdown when I opened his little cereal bar and, brace yourself this is horrible, PUSHED IT OUT TO MAKE IT EASIER TO HOLD AND EAT. Cue meltdown. The worse thing was the withering look and tut from his mother “he likes to push it out himself.” 😐

I don't want milk.
WHY AREN'T YOU FEEDING ME MILK?
This cardigan makes me angry.
I want to chew on my giraffe.
THIS GIRAFFE OFFENDS ME! https://t.co/Q2K3IH0TKM

I know that feeling, except my ‘toddler’ is 50 years old, and because I don’t cut them like his mum did, I’M doing it wrong 😐

Writing 3 year olds name on Halloween pumpkin: STEVEN, 3 yo throws himself on the ground screaming until I finally figure out he only wants 1 E- STEVN is the new spelling

One – the wall wont move out of her way
Two- didnt want juice that i hadnt offered
Three- the wind was blowing her hair, there was no wind
Four- didnt want the ice pole in the plastic, wanted to hold it, then it was 2 cold and wanted it back in the plastic.
😫

God I’m dreading this stage our 11 month old already screams when you remove her from hazards like the back of the tv, stairs, the open dishwasher. She currently looking me right in the eye & laughing as she tries to rag the cables out of the back of the tv. Witch.

I’ll play.
My 3 yr old had a meltdown because he didn’t get to blow out his sisters birthday candles (he did though). Even he thinks this is ridiculous. pic.twitter.com/rEBOFzWdxc

Daring to make my then three year old meatballs – she threw a complete wobbler & refuse to eat the 'awful things'. Chopping the meatballs up and calling them bolognese helped 😏

My son was 3, he loved Oscer the grouch. So when we went for a stroll we had to stop at every tin trash can and check to see if he was inside. Otherwise it was hell to pay. #meltdown pic.twitter.com/rghZXT8ZtH